When my son Joseph was born last August, he was underweight. The doctors recommended I breastfeed and supplement with formula. I was devastated.

He is the first child for me and my husband, and when I was pregnant, I had dreams of exclusively breastfeeding. But like many other families, it was not a possibility.

After I got over my formula hesitancy, I took comfort that Joey was doing well and gaining weight and had a renewed my hope for a bright future for our new family. But it was quickly replaced with a new concern. In January, I noticed growing holes on formula store shelves.

BABY FORMULA SHORTAGE ALARMS MOTHERS: ‘ON THE VERGE OF A PUBLIC HEALTH CRISIS’

Having worked in retail throughout the pandemic, I figured the supply chain issues that plagued the rest of the economy – everything from pet food to toilet paper – was finally and inevitably reaching the formula supply.

So I started buying extra, mindful of the hoarding mentality that worsened the initial grocery shortages and not wanting to indulge my lurking fears.

Then the recall hit, and it was hard to put aside my fear. Abbott (the maker of Similac formula, among others) recalled its powdered formula and closed a manufacturing facility in Sturgis, Michigan. The shut-down suddenly escalated what was initially a reason for caution explode into near panic.

Jenna Stocker, her husband and her baby Joey

I had returned to work in November and could not nurse so Joey is formula fed exclusively. He is months away from transitioning to cow’s milk and with each grocery run the shelves grow more barren.

The American Academy of Pediatrics (AAP) recommends breastfeeding for the first year of an infant’s life, including exclusively for the first six months.

According to the Centers for Disease Control (CDC), the current percentages of babies born in 2018 (the latest birth year data) who were breastfed exclusively through six months was a mere 25.8 percent. That means most babies require formula at least as a supplement until they can transition to whole cow’s milk, usually around one year.

ABY FORMULA SHORTAGE SENDS TENNESSEE MOM OF 8-MONTH-OLD INTO A ‘PANIC’: ‘I BROKE DOWN’

Families are forced to compete with each other to find a necessity that was becoming alarmingly difficult to find. Every trip to the store induces a tightening in my chest. I worry that I won’t be able to provide for my baby, which compounds the guilt I already feel for not being able to breastfeed. It scares me.

In the months since the shortage started, my husband and I have spent countless hours on retail websites trying to find formula. We’ve logged an outrageous number of miles driving from store to store, coming out empty-handed more often than not. Amazon, Target, Walmart, drug stores; if the shelves aren’t empty, they have per-customer purchasing limits.

My mom texted this week, asking what kind of formula Joey takes; “whatever we can find!” was my hasty reply.

We are fortunate that our son tolerates switching brands, but I know other families aren’t as lucky. And it really does not do any good when the shortage affects all brands, even the store generics.

How could it be that there were endless government reassurances that the supply chain was on the mend and stores were regaining stock, but the opposite was happening with formula – a product essential to infants’ lives?

Only now have I started to read news reports about it. But America’s moms are no closer to a solution – let alone any answer or reassurance of when the supply issue will be addressed. When White House Press Secretary Jen Psaki was asked about the shortage on Monday, she failed to detail any steps the administration was taking to alleviate the issue.

This is unsurprising considering President Biden has previously mocked Americans for their supply shortage fears and it follows the same pattern we’ve seen time and again from this administration: Ignore the problem, claim it’s exaggerated, deflect blame and offer no answers or reassurances.

From a president who ran a campaign based on his empathy, honesty, and claims of “the buck stops here,” he has displayed none of those attributes. Now, women like me are left starting motherhood under a cloud of uncertainty, panic, and fear.

Worry and concern is a natural feeling for parents – especially first-time moms like me. But the worry is supposed to be about teaching our children to be kind, self-reliant, and honest.

It is supposed to be about watching them go through joys and disappointments and learning from mistakes.

It is not supposed to be about whether they will have enough to eat tonight or if the last can of formula on the store shelf will be enough until I find another. 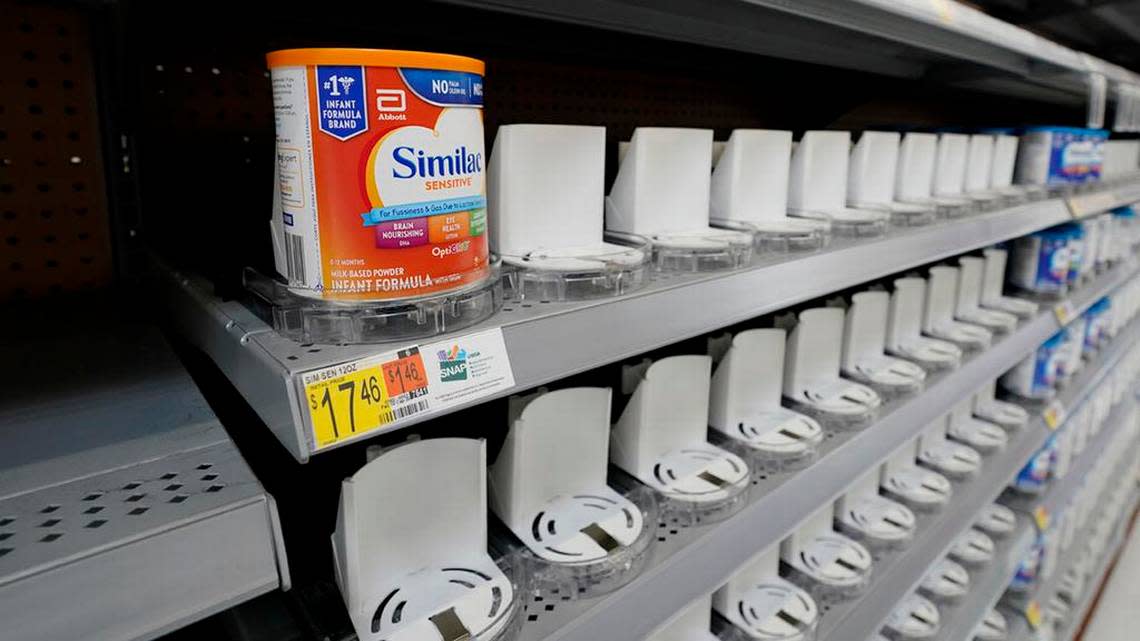 Baby formula shortages, rape, abortion? We all know who should take the blame

Kardashian family: A look at the lavish weddings that built a reality TV dynasty