The woman who last summer discovered the bodies of a newlywed couple in Moab, Utah says that police told her recently they had begun to doubt her story — until Wednesday night, when authorities publicly identified someone else as a suspect.

In the meantime, Cindy Sue Hunter lived in constant dread of being fram ed for something she did not do, and became a pariah in her neighborhood, she told The Daily Beast on Thursday.

Hunter, 64, found the remains of Kylen Schulte, 24, and Crystal Beck, 38, in the La Sal Mountains four days after they vanished last August. The two, who had earlier told friends about being spooked by a “creepy” guy they encountered while camping in the area, had been shot to death. The shocking double homicide made national headlines and set Moab’s 5,200 residents on edge. It was an especially unbearable loss for Schulte’s parents, who had already lost a teenage son to gunfire in 2015.

Hunter first met Schulte the following year, and had become friendly with her father, Sean-Paul. After the two went missing, Hunter said she became frustrated with what she viewed as a lackadaisical search-and-rescue effort by law enforcement. So, she went off to look for the women on her own.

Hunter started at the McDonald’s where Beck worked, and where she and Schulte parked their camper van. As she told The Daily Beast at the time, Hunter “wanted to feel their energy and get a sense of where they were.” She then drove up to the mountains, driving around for several hours while “talking out loud to the girls, begging them to give me a sign.” As she wound her way through the wilderness, Hunter described feeling something she could not quite explain.

“When I went to turn on Lake Warner, I did not want to say I had voices in my head, but I was told to ‘Go straight and hurry,'” she said. “It just kept repeating. I’m going towards Sand Flats Road, and out of the corner of my eye I saw a flash of silver through the trees and I saw a campsite down a tricky little side road. Very easy to miss. And that’s when I found their car. “

Hunter then stumbled upon Schulte’s body, and ran back to her car. She locked the doors and called police. When officers arrived, they found Beck’s remains, according to Hunter.

In the aftermath, Hunter was celebrated by the community as a hero for locating the women and bringing some semblance of closure to their families. But her small art supply store was unable to weather the pandemic, and Hunter was forced to close and leave town. Then, a week after she moved to a new place, her life was truly upended.

“They served me with a warrant last month and told me I was a suspect,” Hunter told The Daily Beast. “It scared me so badly, I felt like I was going to be framed for this fricking murder.”

Three carloads of deputies from the Grand County Sheriff’s Office showed up at Hunter’s new home and dropped a bombshell on her, she recalled.

“They said that my story kept changing, which it did not,” according to Hunter, who said she had taken photographs of the crime scene with her phone to formally document her discovery. “They said my phone pinged up there [near the murder scene], and I said, Of course it did — I told them that I went up there walking several times a week in the summer… They told me it was not usual for people to take pictures at a crime scene. So they thought I might be hiding something. That’s basically what they told me. “

Hunter, whose phone was seized by the deputies, said she has been treated “horribly,” and that she is considering suing the sheriff’s office over the surreal turn of events.

Pinkusiewicz, who died by suicide in September, worked at the same McDonald’s as Beck, according to Grand County Sheriff Steven White. In a statement, White said Pinkusiewicz was “in the La Sals and Moab at the time of the homicides,” and fled the state shortly thereafter. Before he died, Pinkusiewicz “told another party that he had killed two women in Utah and provided specific details that were known only to investigators,” White said in a statement, adding that the investigation remains open.

Since his daughter’s murder, Sean-Paul Schulte has maintained a presence in Moab, manning a “clue booth” to receive any tips people might have. He told a local radio station that he first heard Pinkusiewicz’s name “months and months ago” as “one of many persons of interest,” but said detectives had been unable to locate him. Pinkusiewicz was finally identified as a suspect on May 11, just a few days after reality TV star Dog the Bounty Hunter showed up to assist investigators.

Investigators are continuing to process “critical and newly discovered evidence” in the case, including Pinkusiewicz’s 2007 Toyota Yaris, which authorities recently located and seized, White said in his statement. But Hunter is still feeling stung by police, whom she said have not yet told her she has been cleared. As a result, she is finding it difficult to feel any sense of closure and is reluctant to take the sheriff’s announcement at face value.

“I’m struggling with it because if I hadn’t been pulled in as a suspect, I think I would be elated, overjoyed,” Hunter told The Daily Beast.

As it is, she said she would be “questioning how it was handled.”

“They did not have any answers for us until Dog came to town,” Hunter continued. “We’ve all been waiting for answers for nine months and then Dog comes to town and [suddenly] they know who did it? I hope it was him, and that he’s dead and we do not have to deal with that monster anymore. But I struggle with the fact that they knew [it was him]… And just let us dangle out here. ”

The Grand County Sheriff’s Office did not immediately respond to The Daily Beast’s requests for comment.

Hunter described the past month as “a living hell,” and said she is desperately hoping things will now improve for her. Her new neighbors, who had at first greeted her warmly, suddenly became ice-cold after they saw deputies pull up and “surround” her house, she said.

“I moved and I was supposed to be starting a new life,” Hunter explained. “And [when the police came], all the neighbors saw, and no one will talk to me now. Prior to that happening, people would come to my door, give me their phone numbers, welcoming me to the neighborhood. Not one of them will answer the phone or return my calls. They don’t wave anymore. It has definitely hurt me. ” 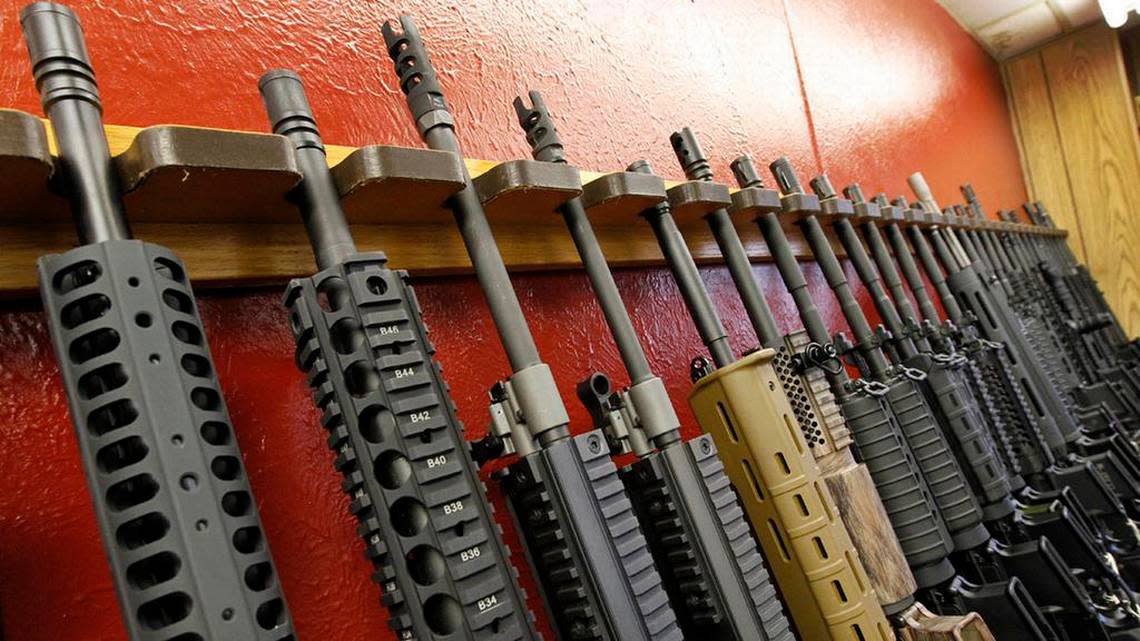 I own guns. I can also read, and I know what ‘a well regulated militia’ does not mean